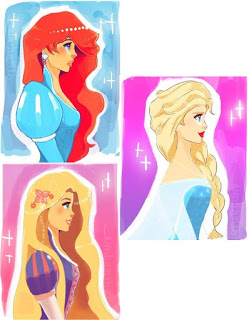 So today is the premiere of what I was working on writing-wise for the past year/year-and-a-half.

Rapunzel’s magic hair spontaneously grows back, Ariel regains her mermaid tail, and winter returns to Arendelle. One year after their most meaningful trials and triumphs, something has taken away what they worked so hard to gain. As they leave the safety of their own kingdoms, fate is about to drive these strangers together across oceans, over mountains, into the depths of the sea, and even through the river of time itself. But will their differences stop them before the curse can?

So you know that fan theory that Tangled, Frozen, and The Little Mermaid take place in the same world? Well, I ran with it.

The plot proper came to me when I was watching Frozen for the fifth time with my daughter. All of the sudden, the ideas came fast and furious. The problem? It’s fan fiction, and I need to be writing something publishable. But in the end, I thought “writing should be fun. It would be fun to write this. If it’s not fun, what’s the point?”

I intended to let it just be something I tinkered with between downtimes at work (like Gatecrash) but suddenly I was dedicating my lunch hour to it. Why? I guess after finishing “Defender” and trying so hard to make it publish-worthy, I needed something where I didn’t have to care what the world thought of it. I could just write like I wanted and not have to worry about rejection-resistance. Plus I wasn’t jonesing about any of my other novel ideas at the time.

The first draft was 200,000 words, so in the interest of time, I only did two drafts. I usually do four, with critiques in the middle (even when it’s fan fiction). As a result, it’s not as polished as it would usually be (see above comment about keeping it fun). I can’t name any off the top of my head, but I’m sure there are plot holes and continuity errors left in there. And that ending I was struggling with to the very end. It’s not 100% cohesive or ironclad, but it’s a serial. It’s more about the journey than the destination, n’est pas? (I don’t know what that phrase means, but it sounded right.)

So now what? Onto regular stuff. Publishable stuff, I mean. (At least writing with the intent to be published). It was nice not to have to think about “the Industry” for a while. And like I said, I’ve been in a slump lately. But I’m hoping that slump was burnout from this beast. Now that it’s in the world, let’s see what happens.