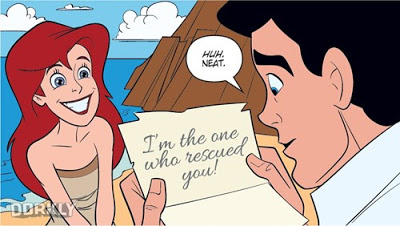 One of the biggest plot holes in The Little Mermaid that everyone brings up is “Why doesn’t Ariel just write out a message to Eric?” One could have explained that away by saying mermaids have no written language if not for Ariel’s signed contract. I’ve tried to explain it by saying it’s translation convention (the same way Klingons speak Klingonese to other Klingons, but we hear it as English). It’s possible that telling him might have an effect on him falling in love with her (like ulterior motives or the fact that she’s a mermaid). However, if the alternative is turning into kelp, I might risk it. But the sad short answer is if she does, there’s no movie.

However, I’ve come upon a possible theory (thanks to a tweet) that could explain this discrepensay. Keep in mind there’s a lot of conjecture here. These are all guesses based on evidence or absence of evidence (which is false cause and anecdotal at best). But at least it’s better than saying that the plot demands it or that Ariel is holding the idiot ball.

Ariel doesn’t know what a pen is. Scuttle never told her or misinformed her.

Let me explain. Ariel knows what a pen is — she uses one to sign her contract with Ursula — but she doesn’t know what humans use for a pen. We never see her write while she’s a human and we can presume she never sees anyone else write. Or she might believe humans don’t use them. It’s not mermaids without the written language, it’s the humans (from Ariel’s POV, at least).

One must presume that she never saw anyone in the world writing or reading. Based on what we see in the film, this is plausible. She spends day one getting clean, then has dinner with Eric. The next day is spent touring the kingdom. I don’t see any words during this part — not even the storefronts have signs. But let’s keep in mind this takes place between the 16th and 18th century. The commonality of literacy was questionable at best. And what it was in Denmark, I have no idea. And the third day, she spends most of it sulking while brainwashed Eric prepares for the wedding.

All right, so obviously there are some issues with this. Here are the big ones.

A) Ariel has books in her grotto.

True, but ocean water plus ink equals one destroyed book. If she found any that she could open without it crumbling to pieces, I doubt the words would stay.

B) But she holds a book during Part of Your World. She even points to something in it.

Yeah, she uses a book during her “questions and answers” lyric, but we never see what’s inside it. She points to something in it, so that likely means there’s still something to see in it. Could be a book of art for all we know. Since my argument is based on lack of evidence, I say counter-points can use the same. Besides, knowing humans have words doesn’t mean humans have something to write with.

C) Doesn’t Sebastian know what a pen is?

By his own admission, Sebastian’s had copious interaction with the human world, by virtue of his crustacean nature (crustature?). We must assume he’s an intertidal crab (the other two kinds, marine and terrestrial, would die if they’re taken out of their respective environments).

Intertidal crabs must keep their leg cuticles moist in order to process oxygen from air. Meaning it’s not likely he strayed far from water in his life. And how many people bring pens to the beach? He was paying attention to the music.

But let’s presume he does know that humans write. I wouldn’t trust Sebastian to spread butter on my toast. He may be a court composer, but he’s a neurotic doofus. He’s too busy worrying about Ariel, the spell, King Triton’s wrath, Ursula’s magic, and his own safety. Just the fact that he has to keep his distance (which translates to all kinds of shenanigans) means his tiny crab brain’s too stressed to think about alternatives. He’s concentrating on playing the game: “You got to get dat boy to keess you.”

D) In “The Scuttle Strut” in Songs of the Sea, Scuttle is helping Ariel write a letter. He specifically says “First you need a tappelhooper / That’s what they use to write / A BALLPOINT tappelhooper / would really be out of sight”

All right, let’s assume that this album is canonical for the sake of argument. Scuttle’s statement implies that there is a difference between what humans use to write and what mermaids do.

But Scuttle never describes what it looks like. Without a picture, Ariel would have to imagine what a tappelhooper is.

She knows what a comb is, but thanks to Scuttle, thinks human combs look like forks. She knows what a saxophone is (or its coral equivalent during the “Under the Sea” sequence) but thinks human saxophones look like smoking pipes. Thus any attempt to ask for one would result in getting a cattle brand or butter churn. If somehow she was able to ask for a tappelhooper, all she’d get would be a funny look.

Also, let’s consider that the first patent for a ballpoint pen was in 1888 in Sweden. The Little Mermaid takes place in 1890 (this is inferred based on the architecture and technology presented, although the fashion borrows from several periods. The original fairy tale was written in 1836). Would it be commonplace enough for Scuttle to know about it by then? (I use the word “know” in the loosest sense of the term.)

E) Even if Ariel doesn’t know what the human pen is, why doesn’t she ask for a mermaid one? Why doesn’t she write it in the sand?

You got me there. We see Ariel use a fishbone pen to sign Ursula’s contract. When it’s presented to her, she knows what to do with it. Therefore, mermaids know what writing utensils are.

The best I can come up with (besides translation convention) is that she is so enthralled with being a human and living with Eric, she forgets all about this. Ariel is a headstrong, lovesick girl. No one said she’s a genius.

Personally, I’m more worried that Eric somehow hears Sebastian say Ariel’s name. Crabs can speak to humans? They just don’t notice? Is anyone worried about this?