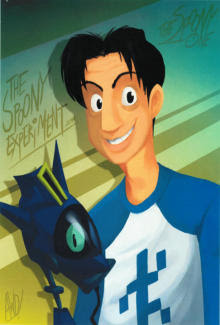 I’m a big fan of The Spoony One, an Internet producer/reviewer in the same vein as That Guy With the Glasses. Personally, I like him better, entertainment-wise, than Doug Walker. The Nostalgia Critic has more of the screwball Daffy Duck slapstick, but Spoony has more of the clever, cynical wit I appreciate.

Recently, he just finished his compilation of the Ultima video games, started two years ago in 2010 (which is an eternity in online video). It spanned twelve games and seventeen videos, with in-between vlogs, conventions, and other reviews. Not to mention several online fights, heart conditions, personality disorder diagnoses (Bipolar II), bouts of depression and sleep disorders, and termination from the very site that led me to discover him in the first place. It’s not been an easy journey.

But the series finished last weekend. But not the way one expected it. Sure, there are AfterEffects explosions, random clip insertions, inside jokes, and lots and lots of screaming. Spoony’s whole theme  has been “betrayal!”

To me, betrayal is nothing new. It’s when developers or publishers take a franchise spew out as much product with that license as they can, to take advantage of the fans.

There are arguments against this. You can’t go home again. If the movie stinks, just don’t go. Get off the treadmill.  One bad work in a series doesn’t ruin the whole thing.

But it does, or at least it can.

And this is not a case of low budget or tighter deadlines. This is a case of problems that can be fixed, should be fixed, and are easy to fix. Problems like a creative director forcing his/her own vision (see Kevin Smith’s story about Jon Peters’s Superman) instead of staying true to the spirit of the material. Or problems like a studio that acquires a license and has no passion about the product, just wants it so they can make money (see Teenage Mutant Ninja Turtles (1989) or Superman (1999). Or just lackluster mediocrity that forsakes the original passion of the fans (Superman Returns)

True, you can’t harness creativity or spark. But there is effort, and that’s what counts. If you make effort, it will show. And lack of effort is just as transparent. The quality doesn’t matter — if it has the brand, fans will get on that treadmill and purchase. And they’re right, but only up to a point. When the crap starts rolling out, they will turn away. And the franchise will be driven into the ground and forgotten.

From Spoony’s review of Ultima 9, it’s very clear that the game — a sequel to more than eight other stories — almost intentionally disregards anything that came before it. Sure, there’s a half-hearted effort to encompass the established history, with mantras and the Guardian. But it completely ignores the details, as if the writer only looked at the backs of the boxes to figure out the storyline. Like an omnipotent bad guy whose plan is full of plot holes, or the main character not knowing what his role is after nine games.

I understand that you need some way to educate newbies, but there’s got to a better way than the main character straight out asking “What’s a paladin?” when he’s been a paladin for nine games. That’s like Captain Kirk asking “what’s a Vulcan?”.

It’s really frustrating to see something you love — something you have so many positive memories of or a personal attachment to — either die or get shit on. You see something like Ultima 9 and curse the sky because you know they could do better. Because you could do better. The people who are in charge of making the product are the ones who should care the most. And they just don’t. The executives pull in people that know nothing about the franchise, who hit gold once or are owed a favor, like whoever directed Star Trek: Nemesis.

It’s a middle finger to the fans — we don’t care that you invested your time and money in eight games. We’re going to give you mediocre gameplay, poor QA testing, characters that act opposite their established personas, and absolutely nothing new story-wise. There are no raised stakes, no new goals, and the main character acts contradictory to his own nature. He’s supposed to uphold nobility and honor, but he regularly visits prostitutes, steals, and kills children. You can almost hear the author shrugging his shoulders.

So now the established fans are alienated by the story, and the poor gameplay estranges the new ones. And no fans mean no further incarnations of the franchise.

And that’s why this really matters. Because every piece of a franchise has the potential to be the last. It happened to great works like Batman, Highlander, Shrek, Superman, Mega Man. Some don’t even have the chance to get off the ground, like Ang Lee’s Hulk, Godzilla, and Hitchhiker’s Guide to the Galaxy. Star Trek 10 ended on a cliffhanger, with one of the most beloved characters getting killed, and someone new to take his place. But we’ll never know what happened after that because it was made so poorly and got rebooted. You either die a hero, or live long enough to see yourself become the villain.

That’s why TMNT fans, myself included, raised their arms in protest when Michael Bay was attached to the new film. And thanked our gods when it was moved to development hell. Because Bay has an established record of making absolute shit. Especially with licenses. I’m not even a Transformers fan, and I hate what he did to it — putting in explosions, racism, and drug humor where it didn’t belong. And TMNT III already did enough damage.

Studios have this narrow-mindedness that says “Oh, people didn’t like this game or movie. And the second one didn’t sell. Guess there aren’t as many fans as we thought.” No, it’s because you put out crap. Executives seem to be of the mind that they don’t have to put in effort. If it’s average, it will sell because we only care about the license. No. We can tell. We can fucking tell when someone cares. Joss Whedon cares. Christopher Nolan cares. And we care.

That’s why people like Kirsten Stewart, Adam Sandler, Justin Bieber, Snooki, Courtney Stodden, Kim Kardashian, Nicolas Cage, and Uwe Boll get such (rightly deserved) hate from the geek community. Because you can clearly tell they’re only doing their job for the money and/or attention. Their motivations are selfish, and their production is emotionless. They don’t give anything of value back to the world. They can’t hide behind the glut of albums, perfumes, music videos, or sex tapes. We know.

And it’s the same reason that people like Joseph Gordon-Levitt, Wil Wheaton, Nathan Fillion, Felicia Day, Samuel L. Jackson, Natalie Portman, Bill Nye, Kirsten Wiig, Neil DeGrasse Tyson, Emma Stone, Tina Fey, Penn Jillette, Justin Timberlake, Adele, and Neil Patrick Harris are so well-loved and continue to be well-loved. Because they try. Even if they fail, they put their best foot forward and put energy into what they do. They don’t phone it in.

I’ve lived long enough that I’ve seen so many of my favorite franchises drilled into the ground, leeching off nostalgia to make a buck. Final Fantasy, TMNT, Star Trek, Star Wars, The Legend of Zelda, Alien, The X-Files, Indiana Jones, Sex and the City, Garfield. They started off with true spirit, but lost their way. (In fact, I’m seeing a pattern that everything George Lucas touches turns to dust).

Some franchises are still keeping their head above water: Half-Life/Portal, Batman continues to reinvent itself, Buffy the Vampire Slayer maintains by not over-producing schlock, Doctor Who keeps fresh by reincarnating both actor and showrunner.

Some are in danger of becoming adulterated by money-making schemes, like Adventure Time, MLP:FIM, Game of Thrones. Back to the Future and Ghostbusters seem in constant danger of an unnecessary sequel, remake, or reboot. And Disney has toed a collapse several times, under its own “too big to fail” illusion.

Thank god for people like Spoony. He’s shown that he’s not afraid to open a vein, like Wil Wheaton on the death of his dog. He’s the one that opened my eyes to why so many of us on the Internet dedicate our time to talking about silly things like He-Man and Oregon Trail. Thanks to him, I now understand why people like Linkara, MarzGurl, The Nostalgia Critic, ContinueShow, and others spend so much time analyzing such horrible, horrible works.

It’s not because they hate them. It’s because they love them. They love Spider-Man and Highlander and Ninja Turtles. And they HATE when someone uses them to sell product instead of produce art. That’s why they use so much humor in their reviews. Not just for entertainment’s sake, but because you have to laugh when you see such goofy, poorly-made shit.

Because the alternative is just too sad.